As one of our initial trainees, Brian Baculis joined the program as a second-year graduate student January 1, 2018 and is expected to graduate in 2021. His major is neuroscience and he completed his undergraduate degree in neuroscience at Temple University. His research topics are learning, memory, and plasticity; neural plasticity; and psychiatric and neurological illness. His research techniques include biochemistry, electrophysiology, immunohistochemistry, and imaging. Some of his recent projects include G-protein inward rectifying potassium channel dysregulation upon seizure activity, regulation of the Kv7 channel complex at the axonal initial segment of hippocampal neurons during homeostatic scaling of intrinsic excitability, abnormal neuronal signaling in Alzheimer’s disease, and mitochondria transport and function dysregulation in epilepsy.

Baculis has completed five semesters of the Special Topics in MBM course and participated in other trainee activities such as the Kickoff meeting, Summer Journal Club readings/discussion meetings, Frontiers in Miniature Brain Machinery lectures, and the 2018, 2019, & 2020 MBM Retreats. He served on the MBM Student Leadership Council from 2019 to 2020. His community outreach activities through MBM include assisting with the MBM booths at the Beckman Open House in March 2019 and the Urbana Farmer’s Market in June 2019. He participated in public outreach through the Neuroscience Department’s Student Village SfN Night and as Spring Lunch Coordinator for Seminar Help in the spring of 2018. In addition, he has mentored three undergraduate students through the Hee Jung Chung Lab and one undergraduate through the Gabi Popescu lab. 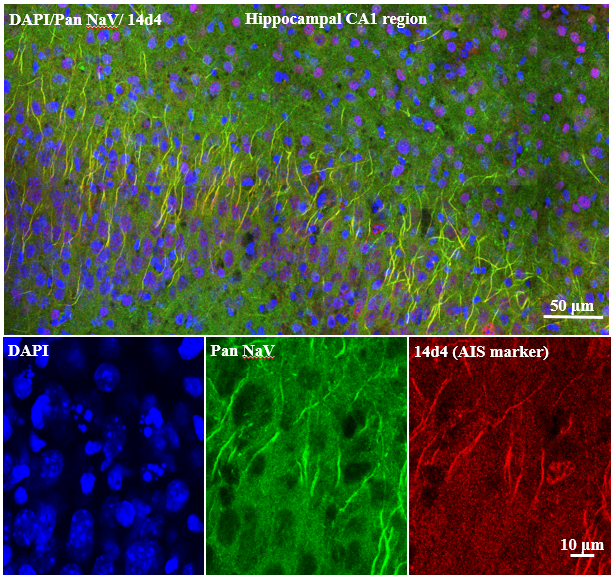 Voltage-Gated Sodium Channels at the Axonal Initial Segment: Imaged at the Core Facilities at the Carl R. Woese Institute for Genomic Biology by Brian Baculis.Research Highlights (in his own words):

Discoveries relevant to our brains, which influence and control such a wide range of actions, emotions, and thoughts, have relied on two complimentary approaches: cognitive and behavior studies and brain cell and tissue biology studies. Our research traineeship program utilizing miniature brain machinery, funded by the National Science Foundation (NSF), combines these two paradigms to train the next generation of Science, Technology, Engineering and Mathematics (STEM) workforce to advance discovery. Our students are recruited from neuroscience, cell and developmental biology, molecular and integrative physiology, chemistry, chemical and biomolecular engineering, bioengineering, electrical and computer engineering, and psychology to foster a culture of innovation and translational research, and will significantly impact efforts to understand and control brain activities ongoing at other institutions.